“It’s not going to do any good to land on Mars if we’re stupid.”–Ray Bradbury

“You cannot be serious.”–John McEnroe

Is Vladimir Putin serious?  He’s really going to put Russians on the moon by next year?  Live Russians? Human Russians?  Russian manikins, maybe.  Or how about those nested Russian dolls?  I have my hunches about his obvious hyperbole.  Like maybe he’s goading a certain Western leader I won’t name to take it seriously and go broke trying to compete with him. All the while what he’s really doing is focusing his resources on hacking democracy and wreaking havoc.

Matryoshka dolls. Send these to Mars?

Space Exploration– Yes, according to Futurism.com, Vladimir Putin did say that he intends to send both manned and unmanned missions to Mars, possibly as soon as next year.  This timetable is a full 5 years ahead of SpaceX’s most optimistic scenario. He might have his work cut out for him.  The Russian space agency has not attempted to reach beyond earth’s gravity well since a 2011 launch failed and fell out of orbit.

–Next Big Future reports on the progress–and relative merits–of AD-Astra’s  VX200SSTM VASIMR® prototype  space propulsion engine.  Recent test firings have brought them one step closer to enabling earth to mars transit in as little as 4 to 6 weeks.  SpaceX, with its BFR, has aims at making the transit at similar speeds.

Quantum Computing–IBM released it’s 5 in 5 list–five inovations that will change our lives in five years.  Most notably they, predicted that quantum computing will be mainstream within five years.  If you listened to my podcast with whurley from SXSW 2018, you’d know that enabling broad use of quantum computing is exactly what he’s aiming for with his new company, Strangeworks (YouTube link below).

—Age of Robots reported on the marriage of quantum computing with biological data.  Specifically, researchers at USC have demonstrated how a quantum processor could effectively predict certain processes in the human genome.

3D printing-–A vehicle its maker says will be the first mass-produced, 3D-printed car, is slated for availability in 2019.   With a price tag of less than $10,000, but with a single-charge range of only 90 miles at a maximum speed of 45mph, it might seem more like a golf cart on steroids than a real car.  Dr. Paul Tinari talked about 3D-printed cars in Seeking Delphi™ podcast #7 in March of 2017.

Self-Driving Cars–In the wake of the Tempe, Arizona pedestrian fatality involving an Uber self-driving car, the New York Times published this guide to how self-driving cars sense the world.

Up next:  one final special edition mini-cast out of SXSW.  Exteme Bionics: The Future of Human Ability.

“Before we work on artificial intelligence why don’t we do something about natural stupidity?” —Steve Polyak

Is this our fate?

There is an ominous feeling in the air about artificial intelligence this week.  It seems to be everywhere, as in “all over the news.”  Elon Musk? We hear from him on the subject every week.  But now one Vladimir Putin has even weighed in.  Both Musk and Putin have dark warnings.  And Putin’s feels a lot like Littlefinger telling Ned Stark not to trust him. Oh, and don’t forget the Chinese, as they weigh in with a massive A.I. investment.  All this as Intel announces a staggering advance in A.I. hardware.

Artificial Intelligence– Elon Musk’s warning du jour on A.I. is that it will be the most likely cause of World War Three.  He’s not worried about North Korea; he thinks that’s just bluster.  The truly hair raising part of it is that he doesn’t so much think it will be a war over A.I. as it will be a war started  by A.I. that has been empowered to make that decision itself.  These conjectures came closely on the heels of Vladimir Putin’s assertion that whomever gains a dominant position in A.I. could rule the world.   He warned that it would be extremely dangerous for any one entity to gain a monopoly.

Cue the Chinese.  They have stated a desire to take a world-leading position in A.I.  by around 2030.  To that end, Chinese internet giant Baidu has teamed up with China Life, a state-owned financial company, to create a 7 Billion Yaun (~$1 Billion US) A.I. investment fund.  The aim is to invest in small private ventures with innovative technologies.

Back in the USA, Intel has announced a new A.I. accelerator that can process 1 Trillion Operations Per Second (TOP) per Watt.  Just what China and Russia are looking for? 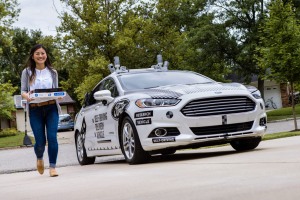 Autonomous Vehicles–Ford and Dominoes Pizza have announced a joint venture to test an autonomous pizza delivery vehicle. (Image left).  As 55%of respondents in a recent Gartner survey found said they wouldn’t ride in a self-driving car, I’m wondering if they’d be OK with their pizza riding in one. 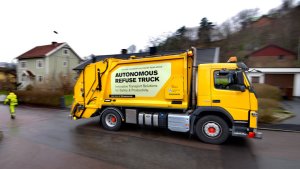 How about trusting your garbage to an autonomous vehicle?  Volvo is developing a self-driving garbage truck.  I hope delivery and pickup don’t get confused.

Cryptocurrency/blockchain–Major cryptocurrencies crashed by 20% over the past two trading days of last week.   Apparently China outlawing ICO’s and the SEC questioning their legality did not help things.  I still think they are basically digital tulip bulbs.

Undaunted by this, six multi-national banks are joining an existing project, headed by UBS to launch their own cryptocurrency, designed for securely clearing large online transactions.  They are currently in talks with regulators on a projected late 2018 launch.