“I would love to have a robot butler.”–Brett Ratner

“I think I’d take a human butler over a robot one.”–Tom Felton

Want one of these?

Are you disappointed that we still don’t have flying cars?  Well then, you might also be bummed out that we don’t have robot butlers, either.  And while one company is trying to provide those robot butlers by an odd hybrid operated by human remote-control, I’m thinking it’s still a bit premature.  I won’t be letting a robot handle a bottle of ’83 Lafite Rothschild any time soon.

Robotics–If Alexa, Siri, or even a Roomba, is not enough for you, the Japanese firm MIRA may have just the answer.  They plan to launch the world’s first robot butler service. But there’s a rather odd catch, and it’s maybe a bit creepy.  The robots won’t operate autonomously. They will be operated by remote control by employees of MIRA.

5G/mobile technology–Even as the U.S. and China square off in a battle dominate the emerging 5G segment of cellphone technology,  Russia is making a desperate play to make up for it’s own lagging effort.  They want to scare US consumers into thinking it’s dangerous. Will anti-5Gers become the kindred spirits of anti-vaxxers?

Future Thinking–Ever notice that experts are often spectacularly wrong in forecasting the future of their fields?   According to the Atlantic magazine,  that’s because they view things too narrowly, and they cite a study to prove that broad thinking generalists often make better forecasters.

—Fast Company says China’s propensity to take the long view will win in the end, economically.  They aim to be the global center of trade and commerce, and a divided, short-term oriented U.S. government may be no match for them.

Uber–Also for the Atlantic,  a word of caution on Uber.  Their tepid IPO might just be a reponse to their risky view of the future.

Lunar Exploration–The Trump administration wants the U.S. to return astronauts to moon by 2024.  They even have shifted some money to NASA for the project.  But the ultimate cost of said missions is still not been made public. 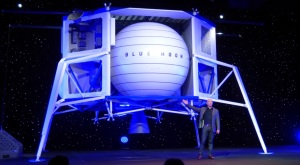 —Meanwhile, Jeff Bezos and Blue Origin have unveiled the desgin for their Blue Moon  lunar lander, which they also target for a 2024 touchdow.  It’s an impressive looking structure, but methinks the name Blue Moon might have some I.P. issues.

This is what Blue Moon conjures up for me.

“My opinion is it’s a bridge too far to go to fully autonomous vehicles.”–Elon Musk, 2013

“We’ll have a fleet of robo taxis by the end of next year.”–(paraphrased), Elon Musk, this week

Ah, you have to love Elon Musk. Or maybe not.  If he were a politician, the election opponents would be all over him for flip-flopping.  Ok, so we’ll allow him to change his mind in light of further technological developments.  The problem is, some pretty big names in field of autonomous vehicles don’t agree with him.  And as for his track record on Tesla promises…well, you know the drill.

Autonomous Vehicles–Barely two weeks after Ford CEO Jim Hackett admitted that “the industry overestimated the arrival of autonomous vehicles,” Elon Musk shot back with a much rosier, prediction. He’s forecasting that Tesla will roll out a fleet of self-driving taxis by the end of next year, even as many other automotive executives are suggesting that 10 years is a far more realistic timeframe than one year.

–Tesla posted this video of an autonomous road trip (below)

Hyperloop/Boring Company–On another Elon Musk front, his The Boring Company made a major step towards a formal government approval of its first subterranean hyperloop transport system.  It filed a 505-page environmental assessment study on the impact of its proposed NY-Philly-Baltimore-DC underground transit loop.  Musk says an initial 16 tunnels for the route between Baltimore and D.C. could be completed in 15-23 months.  Judging by the number of state, local and federal agencies that have to sign off on the proposal, it’s likely to take a lot longer than that to get the needed approvals.

CRISPR/gene editing–One of the inventors of the gene editing process, CRISPR, has a strong message for us.  Jennifer Doudna says we’ll be eating CRISPR-edited foods within 5 years.

–On the other hand, Nature News reports that working with CRISPR-edited lab animals is proving to be a challenge. Key among those challenges is keeping them alive.

Space–China continues to ramp up its space efforts.  They plan to launch an asteroid-comet mission in 2022.  On a more disturbing front,  they are apparently using U.S. satellite technology to ramp up their global surveillance efforts.

—Meanwhile, a more restrained NASA has assembled and tested it Mars 2020 rover.

Gig economy–According to this opinion piece in OneZero, the gig economy may be broadening the rich/poor gap.

Surveillance/Existential Risk.–Techno-philospher Nick Bostrom may be best known as a dyed-in-the wool transhumanist, and the man who first proffered the suggestion that all of us may living in an simulation.   Now–going one step farther than Stephen Hawking’s suggestion that we might need a global government to keep tabs on the existential risks of technology–Bostrom has suggested that global surveillance of every single human might be the only thing that can save us.