“Aging is mostly the failure to repair”– Gregory Benford 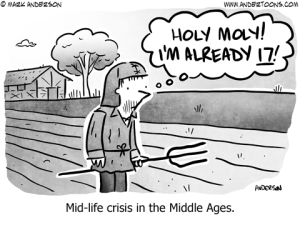 Even as lifestyle issues like smoking, obesity, distracted driving and drug overdoses have of late limited life expectancy gains in the west, there continue to be breakthroughs in anti-aging research at breathtaking pace.  At some point–maybe soon–we may experience a period of anti-aging therapy deployment such that average life expectancy increases by one or more years every year. How long will we live, then?  And the bigger question is: what will be the implications for civilization and the earth as a whole?

Anti-aging/Longevity research–Virtual biotech company, Youthereum, believes they can extend healthy human lifespan by 30% using epigenetics.  The idea of such an approach as  has been around for decades; they believe they are in striking range of achieving it.  The unconventional part of the plan is not the science, it’s financing the research, which they hope to accomplish through an ICO (Initial Coin Offering) of a new cryptocurrency.

—Two University of Arizona scientists have published a paper on the mathematics of aging, purporting to prove that immortality is impossible.  That sounds suspiciously like the scientist who published a paper supposedly proving that space travel was impossible, just a few months before the launch of the first Sputnik.

Food– Food distribution giant, Cargill, Inc., has joined the likes of Bill Gates and Richard Branson with investments in Memphis Meats.  The San Francisco-based (not Tennessee) company says its products–lab grown beef, chicken and duck–will be in stores by 2021 and will eventually cost as little as $1 a pound.  The products use real animal cells, but obviate the need to raise and kill live animals.

Space Launch and Propulsion–Positron Dynamics is projecting the potential launch of an anti-matter propelled cubesat by as early as sometime next year.  It further forecasts that a Mars-bound anti-matter powered rocket could be launched by the 2030’s.

–Meanwhile, Elon Musk’s SpaceX continues to make progress towards lowering the cost of space launches.  This past week, it conducted its fifteenth consecutive successful launch and first stage landing of the reusable Falcon 9 rocket.

—China/Economic Development–The New York Times reports that Chinese president Xi Jinping wants to fully eliminate poverty in his country by 2020.   It’s all part of the larger Xi plan which outlines many of the country’s goals, including those in healthcare, AI, and the sharing economy, through 2050.