“If you die in an elevator, be sure to push the Up button.”–Sam Levenson

On more than one occasion, I have traveled in an elevator that could move horizontally as well as vertically.  How did I manage that?  It turns out I was dreaming–and I must admit I experienced a bit of a disappointment when I woke up.  Honestly, the feeling of moving sideways in an elevator was just, well, cool.  Now, though, a new technology might actually make that feeling possible.

Elevator Technology–Thyssenkrupp Elevator Technology, of Berlin, Connecticut, USA, has developed and, in fact, installed the world’s first cable-free horizontal-vertical elevator in a  test tower in Rotweill, Germany.  (See YouTube video embedded at the bottom of the page).

Space Exploration and Technology–In what appears to be an Asian reboot of the U.S.-Soviet 1960’s space race, Japan has announced plans to put a man on the moon by 2030–and beat China to the punch.  JAXA,  the Japanese space agency, recently announced the plan, thus throwing themselves into a multi-national Asian sprint to the lunar surface.

NASA announced plans to revive a dormant plan for developing nuclear power for space colonies.   Originally envisioned some 50 years ago, it aims at building a mini-fusion plant to provide electric power for bases on the moon and Mars.

Internet of Things–According to a report in Business Insider there will be 24 billion devices, globally, connected to the Internet of Things by 2020.  I feel like there are nearly a billion in my house, alone.

Computer Technology–As silicon technology nears the limits of Moore’s Law, IBM scientists say they have created carbon nano-tube transistors that are smaller and faster than silicon.  No timetable has been set for scaling up to the level of practical, useful devices. 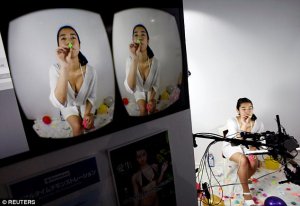 How real is it?

Virtual Reality–The Japanese firm, Futureleap, claims to have invented the virtual girlfriend. Apparently, one can not just view, but actually feel sensations of an imaginary friend breathing down your neck.  Not tonight dear, I have some corrupt code.

Be sure to stay tuned for the next Seeking Delphi podcast, on self-replicating machines, with science fiction author Will Mitchell.