This two part post originally appeared in my first blog, The Millennium Conjectures™ in 2012.   Some background on the basic concepts of quantum mechanics discussed in these posts is available by reading the Quantum Weirdness Primer thread in that blog.  The entire Millennium Conjectures thread provides a fairly comprehensive view of my philosophical views on science, reality and the future.  In this conjecture, I put forth the notion that every possible future exists.

Part One: The Post-Newtonian Wordview

“The Future ain’t what it used to be.”–Yogi Berra

He had absolutely no idea what he was talking about, but he was right nonetheless.  For the way we view the future must, of necessity, be directly related to how we view physical reality. Ergo, as our understanding of physical reality changes, so changes how we think about the future and how we understand what it might turn out to be.   An entire graduate level lecture could probably be based on this conjecture.  I’ll condense the basic idea to a few paragraphs.

Before Apple, the company, there was apple, the fruit.  And before that fateful day when one of those red orbs conked one Isaac Newton on the noggin, worldviews were simplistic and not generally  based on science.   They were mostly mystical or religious.  Supernatural forces ruled the world and what they had in store for mankind was up to them; it was not to be known by us.  But when the soon-to-be “Sir” Isaac set forth his rules of motion and gravity classical physics was born.  Every action had an equal and opposite reaction, every force and its interaction with mass was theoretically calculable, and therefore predictable.  Newton’s laws ruled physics, and indeed, most science based worldviews for nearly 250 years.

Then two guys named Einstein and Planck came along and screwed up the whole thing.  They were followed by the likes of Heisenberg and Bohr and Schrodinger, who threw the monkey wrenches of quantum mechanics, and most disturbingly, quantum uncertainty, into the mechanisms of physics.  Nothing was ever the same again.**

Just how did these 20th century scientific revolutions, along with chaos and complexity theories, alter the Newtonian worldview?

The Newtonian worldview was deterministic, the post-Newtonian worldview is not.  It was theorized, under Newton’s classical laws, that if one could know the position and momentum of every particle of matter and energy in the universe, then one could know everything that has ever happened and could predict everything that ever would happen in the future.   Quantum mechanics and uncertainty skewered that notion; it killed it stone dead.  As explained in my Quantum Weirdness primers, it is not possible to simultaneously know the exact position and momentum of quantum objects, and interactions of quanta with their environment are only calculable as probabilities.

In other words, the Newtonian worldview asserted that we could calculate exactly where any particle of matter or energy would be at any time.  The post-Newtonian worldview states that we can only calculate the probability of finding it in a given position at a given time.  The disconcerting part of that last statement is the “finding” part.  For it asserts exactly that, the probability of finding it if we look for it; it does not predict where it is, for until we look it is effectively in every possible position at once.

How does this affect our view of the future and my conjecture that every possible future exists?  In the Newtonian worldview, there is no free will; everything is determined by the existing state of the universe and there is therefore only one possible future.  That would be the one that follows from applying Newton’s laws to the current state of every bit of matter and energy in the universe.  But in the post-Newtonian world, those rules do not work on a quantum level.  Position and momentum are uncertain and results of interactions can only be stated as probabilities.  In a non-deterministic world, free will is enabled and the totality of the future is unpredictable no matter how much data we have to crunch. 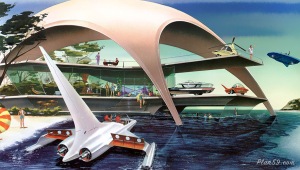 Does this future exist?

OK.  Many futures are possible.  But how can I assert that every possible future exists?   I’ll take that up in Part Two of this post.

**It should be noted that while Albert  Einstein, along with Max Planck, laid the foundations of quantum mechanics, he never believed its predictions of uncertainty and randomness.  Perhaps his most famous quotation, “god does not play dice,” refers to this very matter.  He spent much of the last thirty years of his life attempting to find a deeper meaning–hidden variables–that would give the lie to these notions.  He failed and was ultimately proven wrong.