Today’s lead story brings to mind a classic gag from Woody Allen’s early stand-up comic days.  He told the story of how his father came home from work one day to report that he had been laid off from his factory job; he was replaced by a 50-dollar part on the assembly line.  The sad thing was, his mother immediately ran out and bought one of those parts.

Yes, Voodoo manufacturing has created the world’s first robot-run 3D printing plant.   It allows the humans to concentrate on the creative work while the robots do the menial work, 24/7.  So what happens when A.I. starts doing the creative work?

Writing in the futures blog on Futurizon,  Ian Pearson, Ph.D., takes the position that A.I. will actually create jobs, not take them.  Dr. Pearson will be my guest on the Seeking Delphi podcast, the week of April 10.

Miranda. Maybe this is where all those lost socks went?

Space/NASA–NASA astronauts made a big booboo when they lost an important part of the International Space Station during a spacewalk earlier this week.   One of four pieces of cloth shielding designed to protect the station from impacts by small bits of orbiting  space junk, broke free and floated away.  The astronauts were able to make the other three pieces make do.  That’s a good thing.  For all we know, the interplanetary lost and found could be on Miranda.

Next Big Future reports that there is a push within the Chinese government to triple spending on space science over the next several years.  It’s still far less than NASA spends, though. Projections through the year 2030 are provided.

Digital Media–Business Insider issued a report, along with a free slide presentation, on the future of TV and the digital media that is rapidly replacing it.  Most notable is a forecast that fully 75% of all mobile data will be video by 2022.  My guest next week will be filmmaker and author Steven Katz  to discuss the future of  cinema and the digital video entertainment it is competing with. 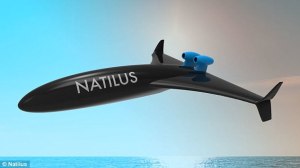 Aviation/Drones– An automated  amphibious cargo drones the size of a Boeing 777 could take to the skies by 2020.  Daily Mail reports that the California company building them is about 70% complete on the first test model.  The final production model will have a carrying capacity of 200,000 pounds.

Biotech/Anti-Aging–PureTech Health has licensed a possible anti-aging compound from NovartisMIT Technology Review reported that Boston-based startup company .  The drug, everolimus has been shown in clinical trials to increase effectiveness of flu vaccines in elderly patients, suggesting that it effectively makes immune systems younger.  The substance is related to rapamycin, which has previously been shown to increase average life span in mice by as much as 25%.