” The only true disability is a crushed spirit.”–Aimee Mullins

In this final instalment from the first Seeking Delphi™ visit to SXSW,  we hear from two of the most remarkable individuals I have ever had the pleasure of meeting.

The session, entitled Extreme Bionics: The Future of Human Ability, delved 100 years into the past, covering the history of prosthetic devices from the crude low-tech devices built for World War I amputees, through to the increasingly high tech devices of today.  Furthermore, it looked to a future that might bridge the final gap to neurological embodyment of artificial limbs, and various technologies that will enhance natural biological human abilities along with prosthetic devices.

Aimee Mullins was born without shin bones and lost both of her legs below the knee at the age of one.  She has hardly let that stop her–she was a paralympian and is a model and actress.  Most notably, she had a recurring role in season two of the hit Netflix series, Stranger Things.

Hugh Herr lost both of legs below the knee at age 18 to frostbite suffered in a mountain climbing mishap.  He is an associate professor and head of the biomechatronics group at MIT’s Media Lab.

In keeping with the future theme of Seeking Delphi™ I asked both of them to imagine the future of these technologies.  This panel was part of the IEEE Tech for Humanity series at SXSW 2018.  Acknowlegements to them, and to Interprose, for arranging these interviews. 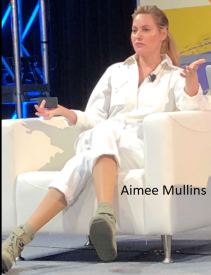 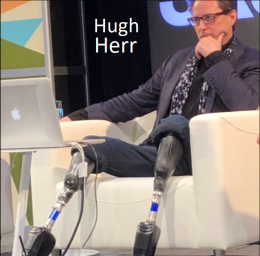