“I don’t believe in a conspiracy to hide the existence of extraterrestrial life.”–David Duchovney 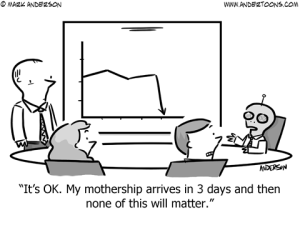 If David Duchovney is right–and I for one agree with him–then Fermi and his paradox certainly become relevent.  But it hardly proves that extraterrestrials don’t exist.  It just proves we haven’t been able to confirm any signals or communication.  What hampers us from doing so?  The vastness of the universe? Our relatively inferior technology?  Maybe they are hiding, as in Cixin Liu’s chilling novel The Dark Forrest?  These are all possiblities, true.  But in a strange ocurrance of the law of unintended consequences, the biggest current hindernece to finding E.T. could be bitcoin mining.

SETI/Cryptocurrencies–This heading might look like an oxymoron.  But in a bizarre turn of events, the cornering of the GPU market by Bitcoin and other cryptocurrency mining has created a shortage that is hitting the video game market, and even the search for extraterrestrial intelligence.

NASA/Space–In another unusual turn of events, NASA will be sending a Martian meteorite back to its home planet on a rover scheduled for launch in 2020.  The purpose is best described as “target practice” for precision lasers designed to pick targets for sample collection that a future mission might return to earth.

How about these for target practice?

—The FCC is looking closely at SpaceX’s plan to provide sattelite delivered  internet.  The head of the agency views it favorably, so don’t bet against it.

—The Trump administration’s latest NASA plans call for a return to the moon.  They call for it; but they don’t budget it.  It likely won’t happend until after The Donald leaves office, even if he gets re-elected.

Autonomous Vehicles —The U.S. Transportation Agency has called a summit on autonomous vehicles for March 1 of this year.  One can only hope that the government might become as concerned with artificial intelligence as it is with this one application.

Matt Chappell has been effectively cured of HIV

Genetic Editing/HIV–As gene editing techniques continue their rapid advance, efforts are accelerating to control, and possibly cure, HIV.  The template may be one patient who has been off medications for over two years with no recurrence.

Artificial Intelligence/Singularity–In an interview with Futurism.com, the father of artificial intelligence says that the singularity is 30 years away.

Nanotechnology–Reasearchers at Arizona State University, working with a team from the Chinese Academy of Sciences, have created nanorobots designed to shrink tumors by cutting off their blood supply.

“A reminder that the Seeking Delphi™ podcast is available on iTunes, PlayerFM, blubrry , and has a channel on YouTube.  You can also follow us on Facebook.